1.2. What is meant by capture and transfer of software programs? 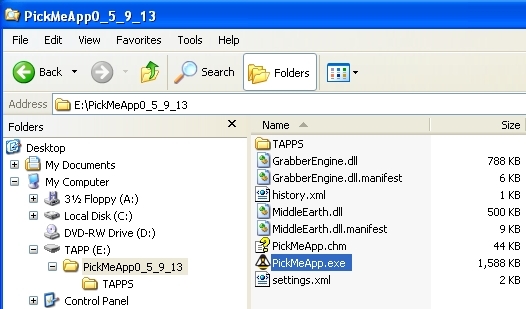 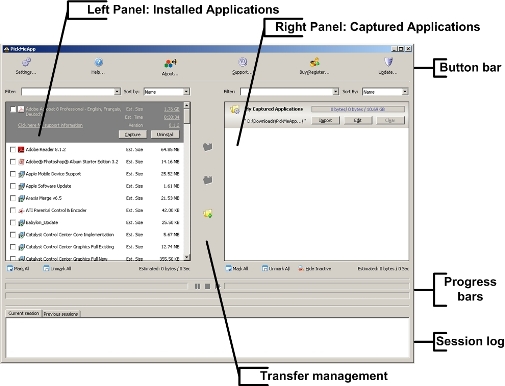 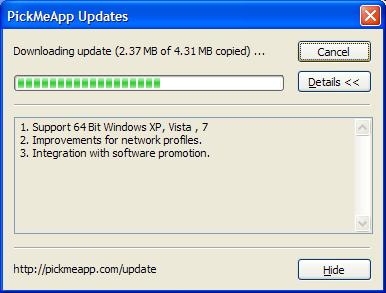 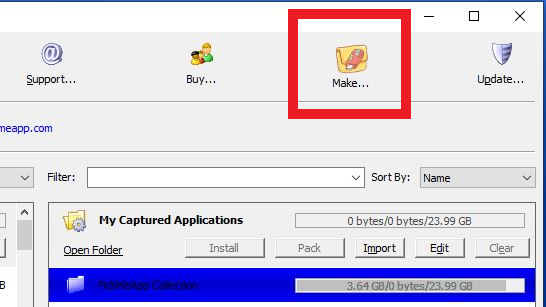 User "Export" dialog to select PickMeApp Profiles you want to have on your portable version of PickMeApp. Once selected press "Export" button to start exporting .

All selected PickMeApp profiles, system files and folders , settings and the license will be exported to the personal portable version of PickMeApp. 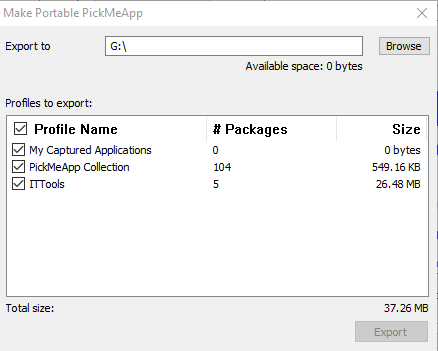 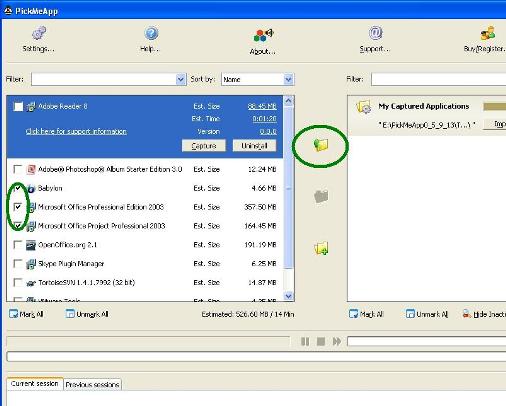 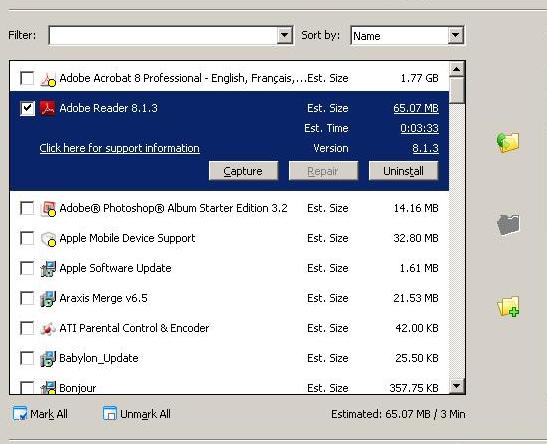 Microsoft Office is a popular example. Microsoft bundles multiple software programs like Word (Word Processor), Excel (Spreadsheet), PowerPoint (Presentation Program) and Outlook (email client) into a software suite. Although each of these programs function differently, they are all considered productivity software.

Prior to this PickMeApp version, a software suite user had to manually locate all related software programs, capture them one by one and then recover them onto the target PC. Some of our app workarounds advised users on how to deal with their software suites.

With this Version 1.2. release, PickMeApp is able to identify related software programs as part of a software suite. It lists the software suite under “Installed Application List” alongside the other applications. The user can easily distinguish software suites by their names which starts with “@Suite@” and the bold title fonts. Users can also use the <suites> 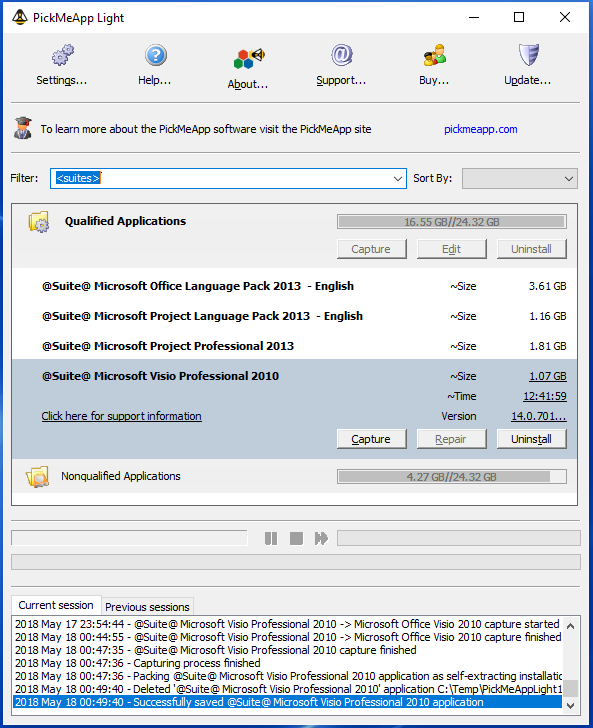 To allow smooth repair and install additional components and features, many software programs cache some installation files on the user’s PC during their first installation.

Since version 1.2, PickMeApp has been able to capture and transfer applications’ installation caches while capturing the applications. Along with the “Check integrity of installed applications” feature, this new function significantly improves application re-installation.

One drawback of the capturing setup cache feature is that the captured package has a larger size. Sometimes it may be twice the initial package size. Also, the capture may take longer time. Disable this feature if you need quicker capturing or a smaller installation package! 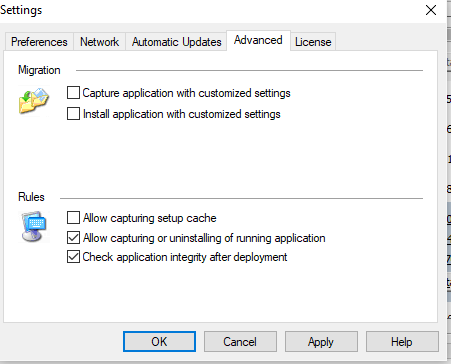 6.3. Quick Introduction to use PickMeAp with PAD files

To list a custom remote collection of applications define Web Profile and set remote link that list all urls on PAD files of the applications. 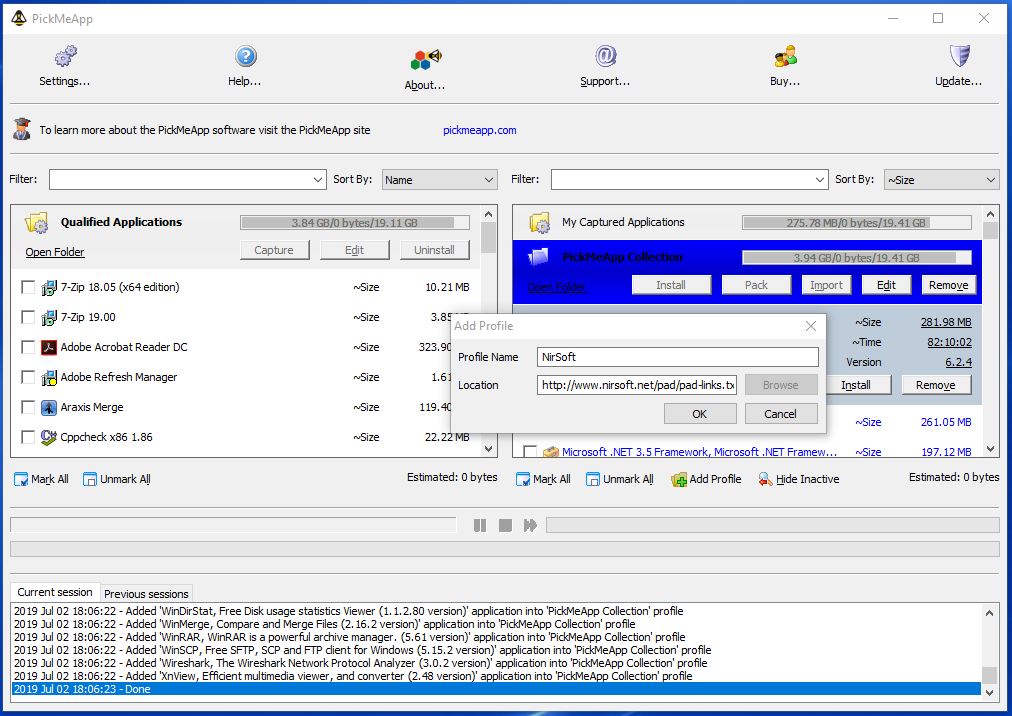 PickMeApp PRO can try to guess the type of installers used to install or package the application to apply known silent installation or uninstallation switches to the application.
Guess mode is enabled or disabled using Advanced Settings dialog .

If Guess mode is enabled PickMeApp PRO will allow

Note: The following feature is only relevant for the PickMeApp Installer.

PickMeApp Installer offers a unique feature that analyzes if installed software programs are supported by PickMeApp. 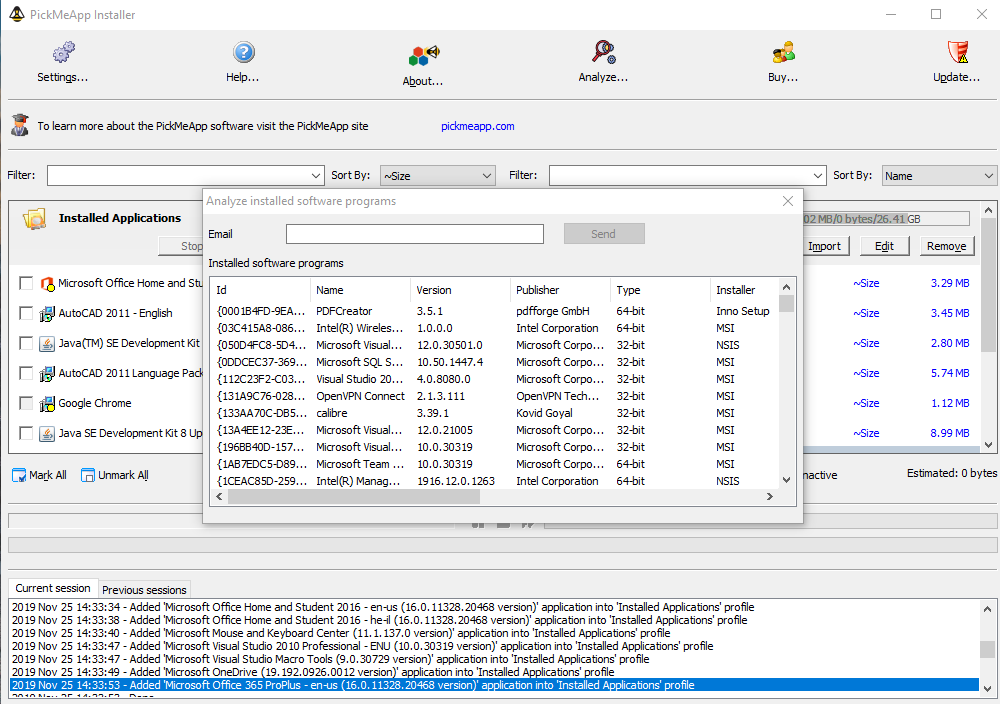 To send a request for supportability analysis, complete the following:

Once the PickMeApp server finishes its supportability analysis, the detail report is sent by email.

Note: Only one analysis request per 15 minutes can be sent.

Using this feature, it is possible to verify if PickMeApp Pro or Light can capture and transfer your applications without having to purchase the license. This setup can be run in interactive mode as well unattended/silent mode using /S switch.

The following InstallSilent.bat script can be used to automate installation of captures software programs.
(The script can be located in the "Tools" directory of PickMeApp Light setup). 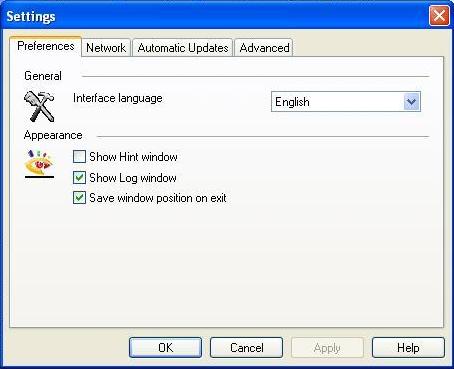 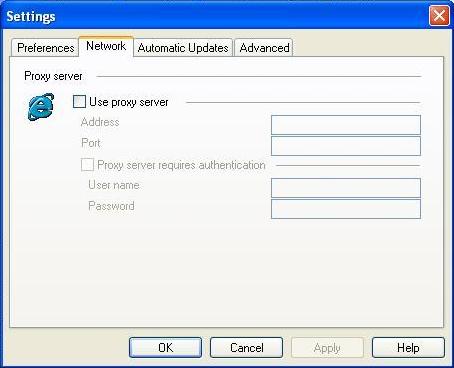 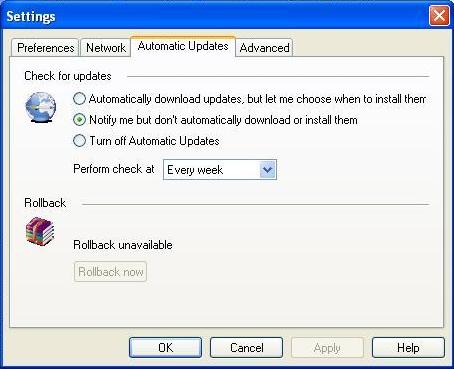 9.1. PickMeApp fails to capture an application

9.2. PickMeApp fails to deploy an application

9.3. Applications installed on the computer are not present in the left panel

9.5. After deleting an application from the installed applications list (left panel), it is still listed there

9.6. PickMeApp does not allow you to choose an application to create a personalized package

9.8. PickMeApp does not remove an application installed on your computer

9.9. PickMeApp does not show the Profile Name, or the personalized packages are not present

PickMeApp’s full range of software management functionality makes PickMeApp the most advanced and the best software updater tool in the market. Here’s why:

The outdated programs will be marked by red exclamation mark "!".
Alternatively the upgradeable filter can be used to find programs that can be upgraded.

It is possible to upgrade one or several applications in a raw by pressing "Upgrade" button. Any application from PickMeApp Collection once installed on the computer will be monitored for upgrades.

To make sure that installed software will be monitored for upgrades, import its PAD package to one of PickMeApp profile . As reminder the official PAD repository (http://repository.appvisor.com/) contains more than 15,000 software titles.

It is ok to import corresponding PAD package even after application was already installed.

11. RELOCATE INSTALLED SOFTWARE TO ANOTHER DRIVE

11. RELOCATE INSTALLED SOFTWARE TO ANOTHER DRIVE

Many Windows computer users with small SSD system disks (128 – 256 GB) are falling into the same trap: Although the initial hardware requirements for the operating system installation seemed sufficient with these disks (about 20 GB for Windows 7/8 and 40 GB for Windows 10), the continued usage of Windows OS gradually uses up any free space left on the disk.

At first, Windows users feel safe installing software on their default drive, even when it only has 128GB of storage space. In addition, Windows updates, drivers, settings, application and system caches, logs and user files are all saved on the system disk as well. After 1-2 years of running Window OS with a small SSD, most Windows users run out of free space on the system disk.

While it is possible to free space by moving personal files onto an additional larger disk, about 80% of space on the system disk would be still occupied by installed software and system files.

Uninstalling and reinstalling software on a new disk seems like a tedious and error prone solution in this situation. The better solution would be to relocate installed software to a new disk as-is. Eventually, Windows provided a built-in technology that makes such relocation possible. The technology, called junction points, allows a Windows user to anchor the paths of some source folders on one disk to the target folder on another disk. Users can free up space on their system disk by moving application folders’ content to another drive and anchoring their original locations to the new folders. This allows them to keep the rest of their application components like shortcuts, registries, and configurations.

PickMeApp provides an intuitive and user-friendly solution to move installed programs to another disk. Once a user chooses to relocate one or several installed applications, PickMeApp takes on all necessary operations necessary to perform the relocation of an installed software.

Relocated software works seamlessly with management operations such as running, terminating, capturing, uninstalling, and upgrading installed software. After uninstalling an application, PickMeApp will cleanup any leftover application data and will preserve relocated applications after the upgrade in most cases. Users can always revert the relocation by installing software back to its original installation location.

PickMeApp supports relocating applications on all Windows operating systems with NTFS drivers, starting from Windows XP SP3 and up. By using PickMeApp to move applications on another disk, users will effectively free up 95-99% of system disk space that was previously occupied by installed applications. In future releases, PickMeApp will provide a solution for freeing even more space, which will further prolong the life span of Windows computers with small SSD disks. The Relocation settings tab shows a sorted list of compatible drives available on the computer. The first drive on the list is the drive with the most available storage space. The drive that is currently chosen as the destination drive is show in bold.

The list does not include non-NTFS and removable drivers. No drive can be chosen if there is only one compatible drive available on the computer, and the relocation feature is disabled. A driver without free space cannot be chosen as a destination drive.

Note: The relocation feature is enabled on computers with two or more non-removable NTFS drivers.

Select the destination drive in the drive list and press the “Apply” or “OK” buttons to save your choice. From that point on, any new relocations are done on that destination drive. The PickMeApp Session log will then show the following message:

“Drive <name of drive><Disk Label:> was chosen as relocation destination.”

Once a destination drive is chosen, you may start the relocation of a single application by pressing the “Relocate” button available on the Application Bar of any installed application (Qualified and Non-Qualified).

Note: You cannot relocate an application that is originally installed on the destination drive (e.g., disk C:).

The relocation may last from a few seconds to several minutes, depending on the size of the application and speed of the source and destination drivers. In some cases, you may experience a short period of desktop flickering. This happens when PickMeApp is trying to release some locked files prior to the relocation.

Note: It is important that during relocation, the computer is not accidentally switched off (e.g., pressing the power button), otherwise the application may end up in a non-operational state.

In some cases, you may be prompted to restart your computer and to run PickMeApp again to finalize the relocation of applications. You may restart computer once per several relocations. 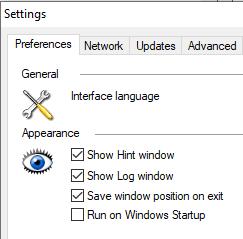 PickMeApp Pro can relocate several selected installed applications at once.

Make sure to restart the computer and run PickMeApp again if at least one application relocation requires a computer restart.

You may find relocated applications by applying the <relocated> filter in the Filter Bar. Remaining applications means to return application folders to their original location after relocation.

Note: The Remain button is disabled for relocated applications waiting for a computer and PickMeApp restart.

The Remaining action is very similar to the relocation of application. The remaining process may last from a few seconds to several minutes, depending on the size of the application and speed of the source and destination drivers. In some cases, you may experience a short period of desktop flickering. This happens when PickMeApp is trying to release some locked files prior to remaining the application.

Remaining applications may require restarting the computer to clean up the remaining data from the relocation. In such cases, PickMeApp prints information message inside the Session Log. The “Restart” pop-up is not shown.

Note: The remaining application fails with an error message if there is not enough space left on the original drive.

Note: You can only remain applications one at a time. There is no batch mode available for remaining applications.

To learn more about how to create Windows Restore Points, follow this link: (link).

It is possible to relocate a previously relocated application to another drive by using CLI. This option is not available via PickMeApp UI.

The best way to uninstall a relocated application is to use the PickMeApp Uninstall Feature described here: (see link)

To allow a proper clean up after uninstalling a relocated application, make sure that PickMeApp is running during the uninstall process.

In a case when a relocated application was uninstalled while PickMeApp was not running, the application’s relocated files and folders might be left on the destination folder. A manual cleanup will be required in this scenario.

There are two scenarios for application upgrades:

If you need to contact PickMeApp support about relocation or remain installed applications , please provide PickMeApp Support with the following files: